A trip to Cannon.

Cannon is held annually in Retford Town Hall, and whilst in the past we have put on a small game, my partner-in-crime and chief supplier of figure and terrain, Steve Jones, was inconveniently on-call for work today and couldn't come. That left me with a pleasant drive through the springtime Nottinghamshire countryside to Retford for the luxury of attending a show as a visitor, for a change. 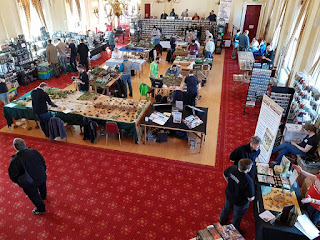 I've always though that shows need a reason for being, a niche of their own, rather than just being another show on the circuit. Cannon is unashamedly a local show for local people, and all the better for it. The Retford club, under the able leadership of Darren, have put on Cannon as a local show for several years now, and it has a friendly relaxed atmosphere which is great. The traders seem happy to be there, and not too bothered about hitting a target figure for sales, more happy to spend time talking to their friends and regular customers. As a local show there are some of the names you may be familiar with (Foundry are local, after all), and a few traders who were new to me, but interesting to see. 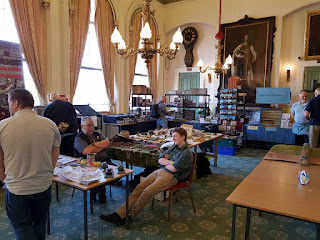 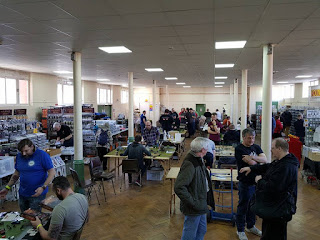 Downstairs the Yorkshire Renegades were running a Bolt Action tournament amidst the ongoing smell of bacon sandwiches, and tempting looking home-baked cakes. Upstairs the select demo games included James Morris' latest effort, Crete in 1941, using the Two Fat Lardies Chain of Command rules. As always the game looked immaculate, and it will also feature in our first (May) show. 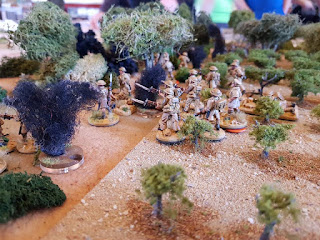 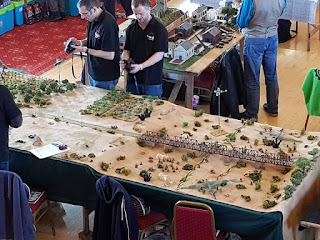 Next to it the Ministry of Buildings game featured a heavily urban setting, and hopefully we will be seeing that at The Other Partizan in August. 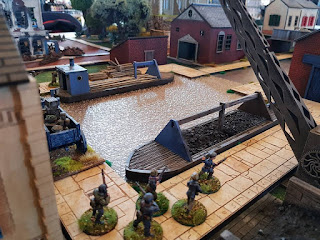 For me I achieved the almost unheard-of feat of not spending anything (apart from the admission fee), which may reflect my advancing years and increased discipline, or just be a reaction to some recent tidying when I realised that unless I live to be about 115 I am unlikely to paint everything I already have.
Overall a nice relaxed morning, always nice to be at a show and not have to worry about sorting out the myriad little things that an organiser has to do on the day. Today that was Darren's job...