One of the rulesets to really catch the imagination a few years ago was the "Setting the East Ablaze" rules from Partizan Press (after whom our show is named).

Designed for gaming the popular 'Back of Beyond' period, these have recently been updated and, in association with Caliver Books, there will be two games presented at the forthcoming Partizan show on May 20th making use of these rules.

We have been sent some details of one of these games which will be presented by "Like A Stonewall Wargames Group". Their game will be based on a little known but fascinating episode at the end of World War 1 when British troops under General Lionel Dunsterville were sent to Baku on the western side of the Caspian Sea to try and hold the city against advancing Turkish forces. The Turks aimed to capture the important oil fields in the area and also use the city as a springboard for crossing the Caspian and uniting the Turkik tribes of South Central Asia with a view to threatening India - what was known as the Pan-Turanianist movement. 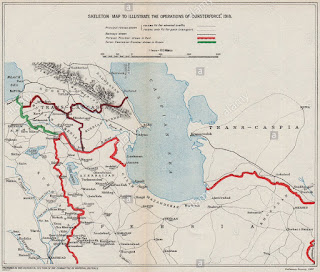 “A successful attack from the north-west would bring the Turks into the town [Baku] before the inhabitants were aware of their proximity.”
– Major-General Lionel C. Dunsterville

After the loss of the Dirty Volcano on 26 August 1918, the Ottoman Caucasus-Islam Army advanced troops on the northern shore used the opportunity to work further and further eastward to encircle Baku, and occupied the village of Bina, due east of the city. That stirred the Baku authorities to action, and arrangements were made to attack Bina, “to prevent the encirclement of Baku.”

‘Like a Stone Wall’ Wargames Group have been play testing this and other scenarios for a new Partizan Press publication about the adventures of Dunsterforce by Bob Giglio.
Posted by Tricks at 04:52