From Brussels with Love

Over the years we have been fortunate to have a smattering of international visitors to the show - at least those who have made themselves known to us. These have included, unsurprisingly, more than a handful of North Americans of both the loyalist and rebellious variety (only joking guys) as well as visitors from Japan and Australia. This year, as you may have seen on the Facebook page, we have already been contacted by Roly Hermans who is visiting the UK from New Zealand and has managed to arrange things so he can pay a visit to the show whilst he is here. Of course the most oft spotted foreign fellows at Partizan come from our nearby neighbours in Europe and over the last few years we have had visitors from France, Italy, Germany, the Netherlands and Finland.

This year we have something a little more interesting with (I think) our first game provided from outside these shores. A few weeks ago we were contacted by Jasen Lakic, a games designer from Brussels who runs 3C Boardgames. He asked if he could bring a new block based wargame to demonstrate at the show prior to launching a Kickstarter in May. Of course we are delighted to support new and innovative gaming ideas so leapt at the chance to host the game.

It is called Multiverse War and, according to Jasen's description is

"an area control/character progression/wargame where players recruit armies, explore the new lands and battle for better strategic positions to secure more space for development. The only way to advance through the eras is by killing enemy units or destroying buildings so players must do their best to outmaneuver their opponents and earn those valuable kills. You gain access to more powerful units and buildings by making kills with those units but do not underestimate Heroes. They are special units with increased Health, Action points and many unique and powerful abilities. Veteran heroes are formidable opponents, a strong hero can easily sway the odds in your favour!" 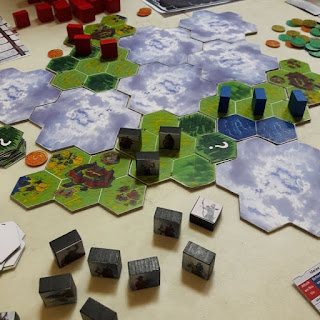 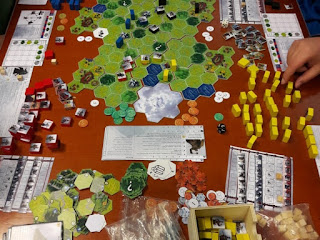 Not our traditional miniatures wargaming perhaps, but just another facet of our wonderful hobby. We are certainly looking forward welcoming our Belgian friend and seeing Jasen's game in real life at Partizan next month.

You can find more details of the game development at:

We always try to do something a bit different with the Partizan figures. Over the last few years this has usually involved basing them on historical figures of interest - both military and civilian - particularly if there is an interesting anniversary lurking around a corner. This year is no exception and we have decided to make a temporary swerve to the left to celebrate two notable figures of the socialist movement.

2019 is the centenary of the Spartacist Uprising in Berlin in 1919. In 1915 one of the founders of the Spartakusbund  (Spartacus League) - originally a left wing anti-war movement - was the Polish-German philosopher and activist Rosa Luxemburg. When Germany was defeated in 1918 the league became very active in the post-war chaos of the German Revolution and Luxemburg, along with Karl Leibknecht, co-founded the Red Flag Newspaper and took part in the first congress that founded the German Communist Party.

In January 1919 a wave of violent strikes and uprising swept across Germany with armed bands attempting to seize control in a number of cities. Although Luxemburg apparently considered this a mistake, she did eventual come to support the uprising in Berlin. But it was a short lived revolution and was quickly crushed by the German Freikorps - mostly WW1 veterans - raised in support of the existing government. On 15th January 1919 Luxemburg and Leibknecht were captured by Freikorps troops and executed.

There is no evidence that Rosa Luxemburg physically took up arms during the uprising but we have asked our figure designer Martin Baker to model her with a rifle as if she were standing on the barricades in defence of the revolution. Here is the green ready for mould making. 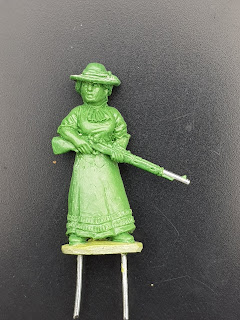 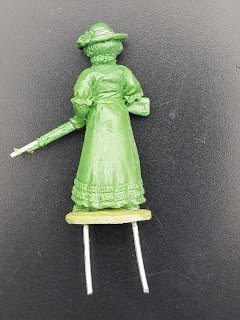 The figure will be free to everyone trading, putting on a game or running a society stand at the Partizan show on 19th May and will also be free for the first 500 visitors through the door on the day.