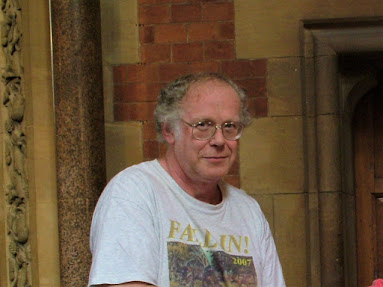 On Tuesday 1st June, Nick Eyre phoned to give me the news that I never imagined I would ever have to hear. Duncan Macfarlane, former editor of Miniature Wargames and Wargames Illustrated, founder of the Partizan shows and one of the best known figures in British wargaming - but more personally, my great friend of more than 40 years - had died suddenly. In the days that have followed there have been many expressions of regret, condolence and shock. Alongside these have been many fond memories and stories of Duncan's warm kindness and the enormous impact he has had on our hobby over the last half century.

Some might wonder why we were so shocked at the news; he was, after all, 73 which, whilst no great age these days, is never the less more than the three score and ten we are vouchsafed (Duncan would love me slipping a suitably obscure word into his obituary). And yet Duncan was one of the certainties in life, one of the anchors around which our hobby has been developed and thrived. He was always there, seemingly never aging - he had looked middle aged since his early 20s - rarely if ever ill, always just a phone call or a quick trip to Nottingham away.

Duncan was a studiously private man. An obituary would normally have some general details of his life but to be honest even after many decades, few of us really knew that much about him. I mentioned earlier that he was 73. The question of his age was one of the great secrets of his whole life and formed a regular topic of conversation amongst his friends with everyone making their own calculations of how old they thought he was. In the end he was older than any of the guesses but it is terribly sad that it took his passing to finally resolve that question. He hailed from Driffield in the East Riding of Yorkshire and studied at the University of Leeds, graduating in 1969 and securing a job as Librarian at Sir Leo Schultz High School in Hull. Looking through the memories of some of the students from those days, it is clear that Duncan was a popular member of staff and was already pursuing the interests with which he would become synonymous in later life - teaching wargames to the students, organising board games events and holding scrabble competitions. He was remembered as a 'breath of fresh air' at the school.

It was whilst working in Hull that Duncan first met Peter Gilder, a meeting he recalled in Peter's own obituary that Duncan penned in Wargames Illustrated in 1991. Duncan had gone to Ron Jewitt's model shop in Hull looking for an elephant for his Achaemenid army and Peter happened to be in the shop and took Duncan to his house to present him with a gift of said elephant. They became firm friends, entering competitions together and, even though Duncan left Hull in 1981 to move to Newark to begin work at Citadel Miniatures, they still gamed regularly together and, in the early days of Peter's Wargames Holiday Centre, Duncan would be called upon to make up the numbers if paying guests were a little light on the ground.

Peter Gilder had always been very keen on expanding the appeal of wargaming to the wider public. In 1978 he worked as advisor and provided all the terrain and figures for the first television programme dedicated to the hobby - Tyne Tees' Battleground, fronted by Edward Woodward. Duncan, along with John Tilson, was chosen as one of the opposing generals for the first programme and, even at a distance of more than 40 years, is instantly recognisable in both voice and mannerisms, hunched over the table refighting the Battle of Edgehill. When, in 1983, Peter Gilder and the businessman Stanley Gee decided to produce a Wargames Magazine for the mainstream market, it was Duncan who was chosen as its first Editor. He would always jokingly claim that this was because he was the only wargamer that Peter knew who, having worked as a librarian, knew anything about 'literature'. Whatever the reason, it was a perfect pairing. Duncan very much shared Peter's vision of a high quality glossy magazine with top notch articles and particularly with the very best colour photography that would serve to inspire budding wargamers, and hence Miniature Wargames was born.

From the very start it was a great success. Duncan was not only editor but also photographer, travelling to the Wargames Holiday Centre to photograph the huge collection figures, exquisitely painted by such notables as John Blanche, Phil Robinson, Dave Thomas and Mark Allen, that would grace the pages of the magazine. Later he would invite gamers to bring their collections to be photographed in his wargames room at his house in Newark or would travel around the country to clubs and wargamer's houses, carrying with him his lighting rig and 5x4 plate camera. He was meticulous in getting the right picture and showing the figures in their very best light, set in superb hand crafted terrain and insisting on each stand being carefully 'flocked in' to hide the bases and make the scene look more natural. He put the same effort into editing and proof reading and the result was a representation of our hobby that looked as professional - often more so - as any other magazine on the shelves.

It has to be said that Duncan was a terrible businessman and his organisational skills were, to put it bluntly, shocking. After a few years he lost control of Miniature Wargames but then decided to do something unheard of. He turned around and founded another wargames magazine based on exactly the same ethos as Miniature Wargames. Launched in 1987, Wargames Illustrated quickly became the world's premier tabletop gaming magazine. From the start it signalled its intent with the symbol of the phoenix rising from the ashes and, with the same attention to detail and quality in both photographs and articles, it continued the aspirations of Miniature Wargames to inform and inspire in equal measure. When he sold the magazine to Battlefront Miniatures in 2009 Duncan continued to work on the publication alongside its new editor Dan Faulconbridge, photographing and proof reading in much the same way as he had as owner. This remained the case after Dan took over ownership in 2015 and it was a relationship that continued up to Duncan's passing.

Whilst the magazine was Duncan's main focus of attention, he also produced a series of 28mm miniature ranges - most notably an extensive War of Spanish Succession range under the Stratagem imprint and, more recently the Trent Miniatures Late French Revolutionary range.

Of course the business side was by no means Duncan's only contribution to our hobby. In 1983 Laurence Baldwin, recently moved to Newark, contacted Duncan to ask if there was a wargames club in Newark. Duncan's response was "No. Why don't you start one?". Thus the Newark Irregulars were born. In 1986 Duncan suggested that the Irregulars should host the East Midlands Regional finals of the Nationals and, with a couple of demonstration games along side the competition tables and three traders, the first Partizan show was held at the Grove School sports hall.

Duncan continued to organise the show alongside Laurence, John Laing and myself into the mid 1990s when he started to take a less prominent role, concentrating more on photographing the amazing games that were bought to the Kelham Hall venue. It is undoubtedly the case that the success of Partizan as a showcase for the hobby rests largely on the fact that those bringing games had a good chance of seeing their hard work rewarded by being published in Wargames Illustrated. But even though he took a less active role in running the show, Duncan never the less continued to influence its development and direction for many more years.

It might seem that Duncan's whole life revolved around wargames but nothing could be further from the truth. He was, in his younger days, an avid cyclist. When working as a librarian in Hull he still lived in Driffield and would cycle to and from school each day - a round trip of 50 miles. In the late 80s and 90s he would think nothing of jumping on his bike and riding the 65 miles from Newark to Beverly on a Friday evening to visit his father. He loved jazz music, good coffee, real ale and fine port. He was a life long scrabble fanatic and competed both at a national level and in regular sessions with other Irregulars at their houses around Newark. He also loved all manner of other board games, was an accomplished Go player and could lose himself in cryptic crosswords. He counted himself an expert on Tolkien in all its forms and  when, last Christmas, I texted him a quick seasons greetings on Christmas day the response - typically Duncan - was a curt "SSSH! THE LORD OF THE RINGS IS STARTING!".

All this gives some indication of what Duncan did and perhaps a little of who he was. But it is not in the bare recounting of his life that we get a measure of the man but in the words of those who knew him and who have been expressing their feelings about him after his death. Uncle Duncan, as he was known to many, was widely respected and regarded not so much because of his achievements with magazines and shows but because of how he treated those he came across in his travels. People have reflected on how they approached him as a stranger at a show or competition event and found a man happy to talk, advise and listen. Someone who would become a friend. He did have a wicked, ironic sense of humour and a fine line in subtle put downs but these were always reserved for those who knew him well and who he knew would take them the right way. He was a generous opponent in competitions and always an approachable and knowledgeable expert on all matters relating to our diverse hobby. More than that, he was committed to helping others achieve their potential, encouraging writers, figure painters and designers and always ready to give a helping hand if he could. Though, like us all, he undoubtedly had flaws, some of which caused him much grief in his life, his character and good intent always shone through. He has left us with many happy memories and our hobby, though undoubtedly much changed from the one he joined over 50 years ago, still thriving throughout all the recent adversity.

In his closing paragraph of his obituary of Pete Gilder in 1991 Duncan wrote "It is unlikely that our hobby will produce another Peter Gilder. His contribution has been tremendous. He will be missed."

I would like to suggest that our hobby did indeed produce another whose contribution was equally tremendous, who will be greatly missed, and his name was Duncan Macfarlane.