Our great and noble hobby 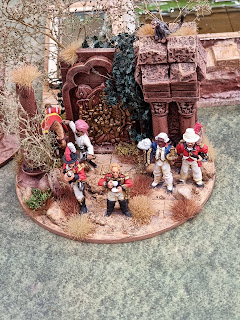 Sunday was a difficult day for the Partizan crew. Whilst the show was, by all accounts, a great success and we could be satisfied in a job well done there was a huge gap left by the passing, since the last Partizan show in August 2019, of four great friends; Klug, Hengist, John Dowman and, of course, Duncan Macfarlane. This was our first show without them and it was felt deeply by all of us, and I think also by many other regular Partizan attendees who were half-waiting for these familiar faces to appear.

There were times throughout the day that I found this particularly hard and one of the reasons for this brief entry is to pay thanks to so many people at the show who realised this and who were there for us; big men with big hearts who made it clear we should not be embarrassed to show our grief and that they understood what we were feeling. I will pick out two for special thanks - Henry Hyde and Guy Bowers, two true blessed souls who both seemed to know, even before we did, what it was going to be like and made a point of being there for us when we stumbled. We will be forever thankful for their support and kind words.

But they are just two out of so many in our hobby who make a point of looking out for each other, treating each other with kindness, respect and understanding, who celebrate other people's victories, share their troubles and mourn their losses.

It is exemplified by the response to the awards that are made at each show. For many years the Irregulars resisted the idea of rewarding games with 'best of' trophies. We were aware that every single game that appears at Partizan - or at any other show for that matter - is the result of endless hours of hard work and dedication and that without them our shows simply would not exist. It was why we originally started the gamers raffle where every game, large or small, gets an equal chance to win a prize as a small token of our appreciation. I am not sure now why we did eventually decide to start giving 'best of' prizes when we moved to the new venue. I was still more than a little concerned about the reaction from those who had not won each time but, as another example of the great heart of our hobby, I need not have been afraid. At every show, when we make the announcements and give out the trophies, the first people right there to congratulate the winners are the other gamers. They might have hoped their game would be the one to win at this show but you would never have guessed it from their reactions both on the day and on social media afterwards. The genuine warmth of their praises is a credit not just to the individuals but to our whole hobby.

It is one of the reasons why we were so keen to get the shows started again. Yes the hobby has weathered the storm and perhaps even thrived online during lockdown. But nothing can replace that wonderful moment of meeting up with fellow gamers face to face once again, of sharing anecdotes and stories, of comparing notes on purchases, painting tips and the latest project and of just putting the world to rights over a coffee or the shake of a set of dice. We are a hobby filled with the most wonderful individuals, the sorts of men and women who, to use an old quote, you would want right beside you in the trenches. It is for this reason we feel it most keenly when some of them pass away but for every one who falls there is another, five more, who are still here and who we should value just as highly.

Personally I am very proud of our hobby; of the intelligence, thoughtfulness and humanity that you all display day after day. We may provide the space, but it is you who are the heart of Partizan and of wargaming as a whole. In spite of the moments of sadness it was a delight to meet up with so many of you again on Sunday and I am already looking forward to seeing you all again next May.

Until then you all have our gratitude and our heartfelt best wishes. Thankyou for making the Partizan shows and wargaming such a worthwhile and enjoyable part of our lives.